Building a Bridge From Our Doctrine to Our Doings

The scene from The Princess Bride is almost blazed into many of our minds. It is a true classic. Viccini and Inigo Montoya are standing atop the cliffs of insanity looking down over the edge as the dread pirate Robers struggles to the top. They have just cut his rope but Roberts manages to continue climbing the rock wall without it. Looking down, Viccini exclaims, "He didn't fall? Inconceivable!" At that point, Inigo Montoya looks over at his knife-wielding maniac of a boss and says, "You keep using that word. I do not think it means what you think it means." 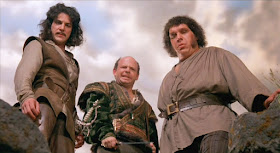 Words have meaning. That is a basic presupposition to communication. It is how I know that as I write this you are able to understand the thoughts I have going on in my head. Words have meaning. I know that seems like a weird way to start a blog but hear me out for a minute. My blog is called Body Life because about once a year I use it to post something that relates to life in and among the body of Christ. In that Body, there is a word that gets thrown around, and to borrow the words of Inigo Montoya, "I do not think it means what you think it means."

What is that word? It is the word "reformed". R.E.F.O.R.M.E.D. What does the word reformed mean? If you asked 100 Christians you would likely get 100 different definitions. Of course, the question is not only a question of definition, it is also a question of degree. How Reformed are you and how Reformed do you have to be in order to wear the badge? Many Presbyterians and Congregationalist brothers would say that the Baptist is not Reformed enough, while the Baptist would claim to be the one truly Reformed, touting that the Presbyterian did not reform enough from Rome.

Paedobaptism and ecclesiology aside, I would imagine that in defining what it means to be "Reformed" many people would say it is to adhere to a certain set of doctrines that emphasize the sovereignty of God's grace in salvation. Some would simply define it synonymous with being a Calvinist. A good definition might also include some reference to the 5 Solas of the Reformation and it may even include a reference to one or more of the great historic confessions of faith. More often than not, when people try to define what it means to be Reformed, the emphasis, if not the entirety, of their answer would center on doctrine, that part of our Christianity that is lived out in the realm of the mind, the essential truths that they believe.

Our forefathers were not so much concerned with being Reformed. Rather they were concerned with ever reforming. They didn't view the work of reformation as a strict adherence to a certain doctrinal conviction; they viewed it as a continual work in which the church needs to examine and continue examining herself to ensure that both her doctrine and her practice were Biblical. Thus the cry of the Reformation as derived from Augustine was "semper reformanda," or to put it in English, "ever reforming." (Footnote 1)

I would submit in order to be Reformed that it is not enough to have sound doctrine. Sound doctrine is, of course, essential, but it is not enough. Paul instructed Timothy in 1 Timothy 4:16, "Take heed to yourself and to the doctrine or teaching ('didaskalia'). Continue in them, for in doing this you will save both yourself and those who hear you." What did Paul mean when he told Timothy to take heed to himself as well as to his teaching? The reference "to himself" reaches back in the text to v12 where he told the young pastor, "Let no one despise your youth, but be an example to the believers in word, in conduct, in love, in spirit, in faith, in purity."

When Paul tells Timothy to take heed to himself, he is warning him of the danger of having a disconnect between what he believes and what he practices. Timothy was not only to teach sound doctrine, but he was also to live a life that was complementary to and consistent with that same doctrine. In short, the doctrines he believed and taught were not to remain in his head. They were supposed to be life-transforming as Timothy exemplified Christlikeness before his congregation.

I would suggest that the flaws in our definitions of what it means to be Reformed remain in the realm of doctrine and ignore the realm of duty. They have failed to build a bridge between our beliefs and our behavior. What was Paul's concern with Timothy? It was not merely his doctrine; it was the entirety of his life.

That is what it means to be Reformed. It means that those precious doctrines we love in our mind and heart begin to trickle down into other portions of our being so that our entire being is being sanctified to conformity to the will of God. It is not that we are Reformed. Rather, we are being and are always reforming.

Here is my concern. I am afraid there are many within the doctrinally Reformed camp who are not truly Reformed because they have never built a bridge from their doctrine to their duty. They have kept Paul's command to watch over their teaching and doctrine, but they have neglected the command to watch over their own lives and their calling, to not only to be an example in doctrine but also in love, in spirit, conduct, faith, and purity.

In Matthew 23:23, Jesus rebukes the religious leaders of His day by saying, “Woe to you, scribes and Pharisees, hypocrites! For you tithe mint and dill and cumin, and have neglected the weightier matters of the law: justice and mercy and faithfulness. These you ought to have done, without neglecting the others."

I wonder had Jesus spoken these words to those of us who are Reformed, would they be much different? For us, the issue may not be strict adherence to the Old Covenant law, but to doctrinal purity where Jesus could say something like, “Woe to you who call yourself Reformed. For you have your confessions and your doctrine and have neglected the weightier matters of the law: grace and mercy and faithfulness. These you ought to have done, without neglecting the others."


Let me give you a few examples:

I was recently following a discussion of a "Reformed" Facebook page where a young man posted a question prefaced by saying something to the effect of, "I am just a young immature believer, please don't crucify me for asking this question." In the preface to his question, he made a passing comment about the general spirit in the group as being uncharitable, and it was that perceived lack of charity that gave him angst about posting a question. Much to my chagrin, some overly zealous person couldn't help themselves and proceeded to threaten kicking him out of the group for attacking the good nature of the spirit of the group. For this particular group, this kind of interaction is not uncommon and threats of excommunication from the group are frequently the first step of internet discipline whenever an administrator is offended or uncomfortable. 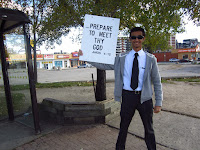 There is no shortage of so-called discernment and apologetic ministries in the Reformed world. While in theory, they may have their place in the context of a local church, most of them today are nothing but a bunch of angry dudes looking to be crucified for the sake of making a Youtube video that will go viral. Thus the tenor of their work is self-righteous, proud, and uncharitable.

While on the one hand, someone could say these are isolated incidents, I am persuaded they are also the tip of a much larger iceberg. There is an angry, uncharitable, unloving, unaccommodating, and even proud side within the Reformed camp. Frankly, brothers, it calls for deep, true, and lasting repentance.

Once a week I lead a Bible study at a correctional facility for troubled young men. On Monday we were talking about Jesus' interaction with the woman at the well in John 4. After reading the passage, I explained to the young men what kind of a woman Jesus was talking to and some of the cultural trappings surrounding this woman that made her unique. Then I asked them, "How did Jesus treat this woman who is not only immoral but also has some weighty cultural baggage and some pretty poor doctrine." The response from one young man was fast and deliberate, "Respect! Jesus treated her with respect, sir!" He was absolutely right. In spite of the woman's poor theology and immoral life, Jesus treated her with respect, love, grace, and charity. He didn't shy away from the truth, but He brought the truth in love. As believers we often consider ourselves in the shoes of Jesus in that story, when in fact, we are not Jesus; we are the woman. We are those who have lived in immorality and sin and who even still have some pretty sad doctrinal baggage, but how has Jesus treated us?

The God of the universe, our creator and sustainer, the perfect theologian and the Holy of Holies, condescends to our weakness and shows us grace, treats us with dignity, does not deal with us according to our sins, but graciously takes us by the hand and calls us to His eternal side.

This has been, and will always be the way in which God affects change us. God has never changed anyone with the law. God has never changed anyone with His wrath or anger. No, it is the kindness of the Lord (Romans 2:4) that leads to repentance. It is His grace that teaches us to deny ungodliness and worldly passions (Titus 2:12),  and it is the great love with which He loves us (Ephesians 2:4-5) that made us alive and saved our souls from sin, death, and hell.

Should we not think that if God changes us with His kind attributes of love, grace, charity, kindness, and mercy, as tools in His hand to do the ministry of reconciliation, so we ought to take up the same qualities and exemplify God in our relationships with one another? As recipients of such grace, should our lives not also reflect this grace?

We should not be content to simply wear the badge of possessing Reformed theology. May the banner of our life be "semper reformanda" as we build a bridge from our doctrine to our doings, imitating our God in showing love and grace to our brothers.